Miles David’s sketches of Spain inspire the title. Further, a masterpiece of jazz came out in 1960. Buildings flowing like a fan recall the wind in the winter. The cadence within the image for New York seems to wave at people, “hello.”

The painting above wakes us up to a challenge of its various cultures. As a result, it makes everybody be part of it and create something new, just like his music.

Furthermore, following the series of projections from the city. I used watercolor paint, adding white directly from the tube. Along consequently, the results are fresh and spontaneous. Watercolor is known for being a transparent media. Also called translucent, it is suitable for constructing forms, shadows, and highlight effects. 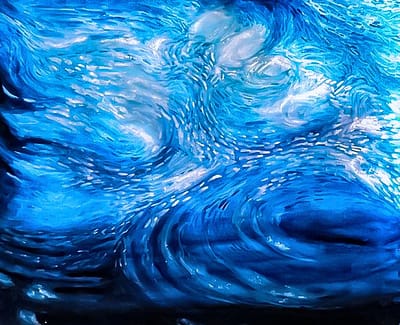 Hurricane Sandy hit Long Island very severely. Houses by the front beach flooded with water up to the second floor. It was scary to hear the news announcing the storm was approaching a minute. Then it hit an electric wire, and I stood there, asking for help inside the house. My mother was taking a shower, and suddenly the light went off. We stood without electricity for a week for the cable, and PSG electrical company did not want to move a line before fixing it. Bureaucracy among these companies never fails when one and the other must take charge. Everything came fast, a hardship memory we remember. These are events transformed into paintings. In the first illustration, blue is a calm color, but it is in chaos. They are waving forms in a circle to depict rage. Its dynamic flow over the watercolor paper. In the end, I’m able to blend these two subjectivity movements.

This site uses Akismet to reduce spam. Learn how your comment data is processed.